In our last post we focused on the hip abductors and adductors and how they can be used to stabilize the pelvis and synergize flexing the hips in forward bends. In this post we zoom out and look at a technique that can be learned with Chaturanga Dandasana and then transported to other poses to improve benefits and safety. I call this technique “ease in, ease out” and it relates to how one approaches the end point of a pose. 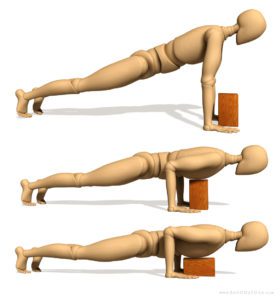 For this cue, I take a yoga block and place it at the level of my sternum, then lower down to lightly touch it from plank position. I then straighten my arms to return to plank. The image that body weight practitioners use for this is “kissing the baby” because one touches the block as gently as kissing a baby on the forehead. Working in this manner teaches muscle control and sensitivity. 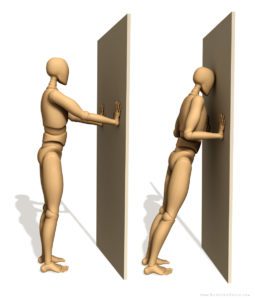 Those who avoid full Chaturanga due to weakness of the muscles involved can develop the strength for the full pose by starting at a wall as shown in figure 2. Here instead of the chest touching the block, bend the arms to lower towards the wall and gently touch the forehead, hold for a moment and then straighten the arms. Work in this manner until you can comfortably do ten repetitions. As strength builds, transition to a plank with the knees on the mat, lowering down to touch the block as in the final version. (Figure 3).

Visualizing the muscles involved is a powerful adjunct to this technique. Use a mental image of the triceps, pectoralis major and serratus anterior muscles engaging to stabilize the arms, shoulders and chest as shown in figure 4. The triceps straightens the elbows and is a secondary stabilizer of the shoulder joint. The pectoralis major draws the upper arm towards the midline (adduction) and helps to expand the chest (when the shoulders are held in place). The serratus anterior extends from the upper nine ribs to inner (anterior) medial surface of the scapula. It acts in concert with the rhomboids to stabilize the shoulder blades and thus preventing “winging” of the scapula in this pose. (Figure 4).

Take a moment to review our post on “co-activating the glutes and abs in Chaturanga” and integrate these muscles into this technique. Also, feel free to browse through the Yoga Mat Companion series. The illustrations in these books are designed to aid in visualizing the muscles in action in a variety of poses.  Slowing the movement as one approaches the endpoint of the pose also sets up a cadence or rhythm, especially when working with a Vinyasa Flow based practice. It can be applied to any pose and also to inhalation and exhalation, thus smoothing the breath. It also aids to protect the joints, which have smooth curved surfaces that adapt best to gradual transitions during movement.

An excerpt from “Yoga Mat Companion 4 – Anatomy for Arm Balances and Inversions”.

An excerpt from “Yoga Mat Companion 4 – Anatomy for Arm Balances and Inversions”.

Check in next week for Part Three of this series on preventative strategies for lower back strains in yoga. Also, be sure to visit us on Facebook for your free Chakra poster and e-book.

By Ray & Chris of The Daily Bandha

Ray Long MD FRCSC is a board certified orthopedic surgeon and the founder of Bandha Yoga.

Chris Macivor is a 3D Graphic Dessigner and illustrator who has been involved in the field of digital content creation for well over ten years.

This article was originally posted on www.dailybandha.com. If you would like more practice with Chaturanga Dandasana, check out the tutorials below on Omstars.com. 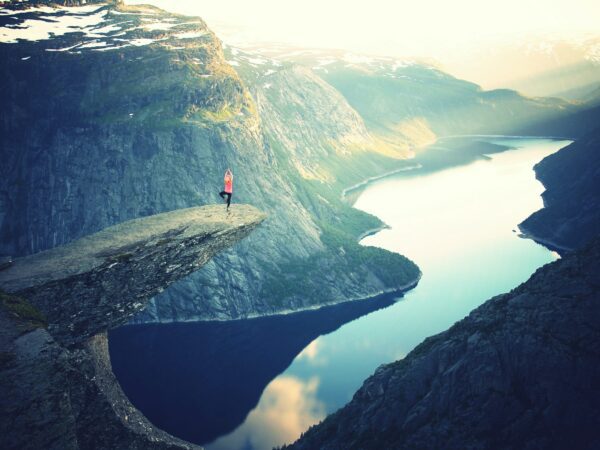 How to Make Practicing Yoga Part of Your Daily Life

Yin Yoga: Who Needs It?