This is my favorite tea to drink. I drink this multiple times a day, especially when I’m writing, and it’s adaptogenic golden mylk.

So, what are adaptogens? Adaptogens are a type of herb that adapt to whatever your nervous system needs. So, let’s say you wake up, first thing in the morning, and you’re really tired, and you take an adaptogen.  That will actually bring up your energy, so, it’s a really good replacement for coffee, matcha, any other kind of stimulant, and there is no caffeine.

Now, let’s say, you take that same adaptogen, at night. It will actually help cool you down, chill you out, and prepare you for sleep. So, they really adapt to whatever the nervous system needs at that time. Either, more energy, or bringing it down. So, it’s really good if you have a stressful job, adrenal fatigue, or anything like that. So, the adaptogen that I am using today is called, Ashwaghanda, and Ashwaghanda literally means, strength of a stallion. It’s a very commonly used adaptogen in Ayurveda, and formally was used more for men, to give them strength, but now a lot of women, we need that extra strength, too. So, Ashwaghanda is good for everyone, and the feminine version of it is called, Shatavari. And you can make this recipe with Shatavari, as well. 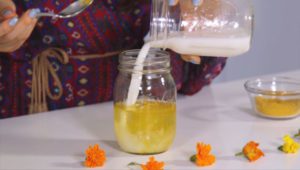 So, golden mylk, a lot of people call this yogi tea, is a turmeric-based potion. The reason why turmeric is the base, is because turmeric is really anti-inflammatory. So, we spoke about how it’s really anti-inflammatory for the brain, and that helps it work as an anti-depressant. Clinical research has now found it as effective as Prozac, but it also works in the body. So, if you’re doing a lot of yoga, you’re doing a lot of exercise, physical activity, inflammation can be created over-time.  So, the turmeric is going to help just alleviate that so you feel much more agile, much more comfortable in your body.  So, it’s really good for everyone. Turmeric also helps burn belly fat, which is another really cool thing about it. It’s been found that it specifically works on fat in the mid-section, again, because it’s stress-related, cortisol-related.  So, turmeric really helps with that. So, I love turmeric for so many reasons, which is why it’s the base of golden mylk.

I like to make this ahead of time, I actually travel with it because I can just take a spoon and add it anywhere. It’s like a tea that requires really no steeping. So, again, turmeric, ginger, black pepper, and the ashwaghanda. Just mix up the powders. You can put it in a little glass jar, travel with it, keep it with you at home. You can actually kind of customize it to what you want. So, let’s say you want it a little bit more spicy, a little bit more gingery, you can crank that up. You can add more black pepper, less black pepper, again, there’s really no rules, just make sure you have the ingredients in there somewhere. 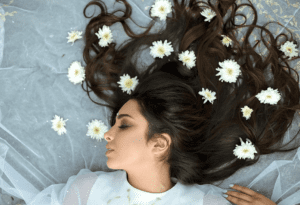 Sahara Rose is the best-selling author of the Idiot’s Guide to Ayurveda, which is the #1 best-selling Ayurveda book globally and Eat Feel Fresh: A Plant-Based Ayurvedic Cookbook. She has been called “a leading voice for the millennial generation into the new paradigm shift” by Deepak Chopra, who wrote the foreword of both her titles. Sahara hosts the Highest Self Podcast, ranked as the #1 top podcast in the spirituality category on iTunes. Sahara’s mission is to awaken people to their innate potential so they can share their gifts and fulfill their purpose on this planet. “This is Ayurveda’s next evolutionary step. Sahara Rose has successfully refreshed and revitalized the ancient knowledge without watering down its significance and depth. She blends reverence for the tradition with an awareness of present-day needs. Find more wisdom on Sahara’s website or Instagram. 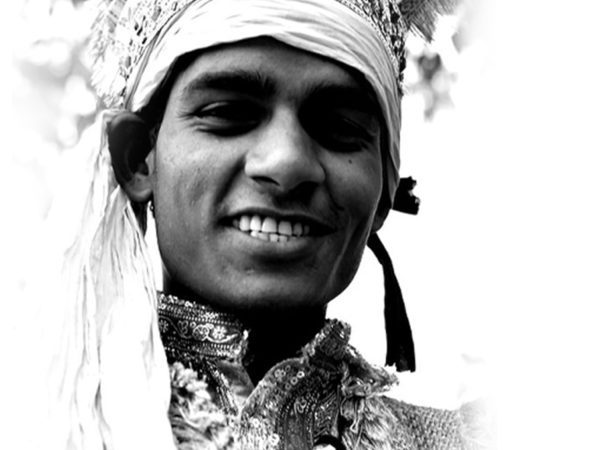 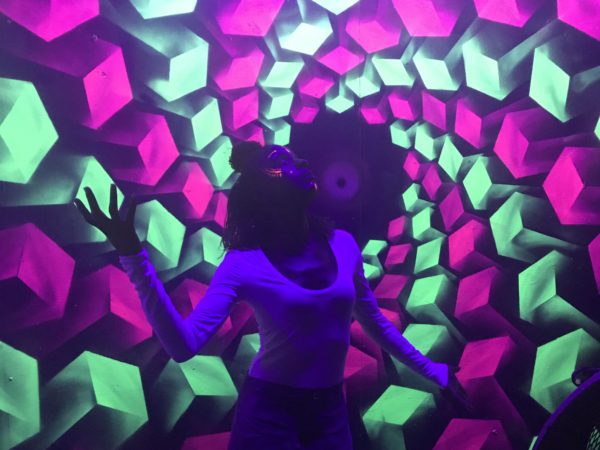 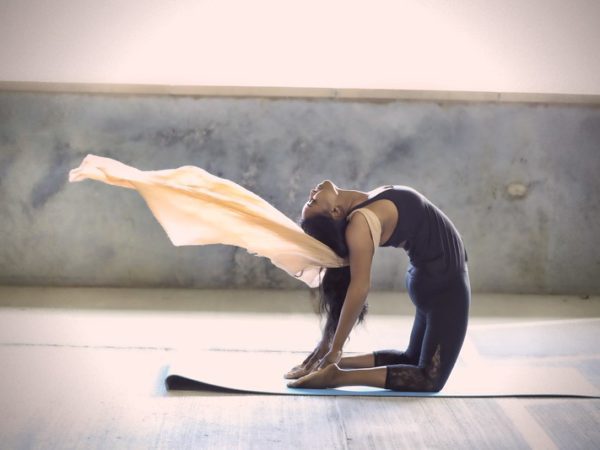 In Support of POC and Marginalized Folks in the Yoga Community

Welcome to the OmStars blog, where we share information about our online videos, courses and teachers, plus tips and tricks for your own yoga & meditation practices, plant-based recipes, lessons from ancient yoga philosophy, featured members, and stories from Kino! Stay informed about everything OmStars and live the yogi life with us! Join OmStars.com today!