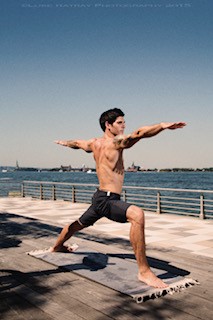 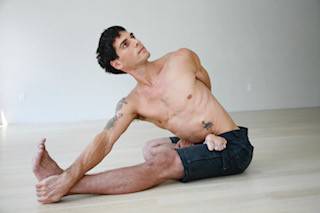 David Regelin is a NYC based yoga teacher, nationally and internationally acclaimed. As a young teacher in 2003, he fronted what became the popular trend of choreographed vinyasa classes to the sound of live music at some of NYC's most successful yoga studios, most notably Laughing Lotus and Kula Yoga Project. Later, he created the famous "Multi-Intenso" class, a technique based, athletic and dynamic style of yoga centered around handstands. His incessant personal investigation into the potential transformative powers that a yoga practice can give, led him to a more comprehensive approach to how physical form relates to psychological and emotional states. Inclined towards the mystical and timeless, greatly influenced by intensive study with Nevine Michaan, David’s practice and teaching evolved into a refined adaptation of how an asana practice can instigate profound and sometimes therapeutic change. Today David is a powerful voice, an eloquent and skillful teacher who is sought after for his workshops and 30 hour teacher’s intensives. His unique talent for simple yet precise articulation of form and technique echo in the bodies and minds of his students 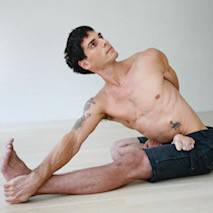 Vinyasa Foundations with David Regelin is a 9 class series that offers short and simple practices that are geared towards beginners and intermediate practitioners. In ...

David Regelin’s Movement Foundations course offers classes you can choose from and put into your personal practice based on how you feel on any given day. This course...

Advanced Approach to Teaching Basic to Intermediate Vinyasa Yoga is a Teacher Development course that was strategically designed by David Regelin. Whether your a dedic...